The North Side. You think you know it – but you don’t.

HEAR ME OUT. You’ve probably heard of some of our greatest hits, including but not limited to “Home of Heinz Field”, “PNC Park is Poppin’”, “Chillin’ at the Children’s Museum”, or maybe even “Reelin’ in the Instagram Likes at Randyland (Extended Edition, 2019)”.

But, like any good album, you can’t just listen to the radio singles on repeat and call yourself a fan. You’ve gotta really dig into it, and check out the songs that aren’t getting all the hype. Because then, and only then…can you really capture the essence of that album.

If you haven’t guessed by now, the album is the North Side, guys. I’m about to come at ya with some of my favorite lesser-known nooks of the North Side.

Open just over a year, Mayfly is the best one-stop shop in the North Side. Yours truly has been known to stop in for a tuna melt at lunch, and leave with a cup of seasonal sorbet for dessert, fresh flowers, a Pittsburgh Candle or three, and some City Fresh Pasta for later.

With a small sitting area, Mayfly makes for a cozy place to relax or catch up with a friend over coffee, but also serves as a quick convenience store when you’re in need of a snack or gift in a snap.

As someone whose side hustle is eating lots of pizza, I can assure you I’ve scoped out the North Side pizza scene HEAVILY. Said scene recently took a blow after Michigan and Trumbull left Federal Galley, but we can all rest easy. Badamo’s is one of the absolute best in the city, and it’s right next to the Mexican War Streets.

The Mt. Lebanon location has been open since 2010, and pizza afficanados can expect the same delicious ‘roni cups and perfect Sicilian here in the North Side as of 2 years ago. This isn’t a hidden gem in the sense that no one is aware of it – it’s right there on Federal with a giant pizza mural! – but more in the sense that this pizza is literally worth coming from the far corners of the greater PGH area to try. They don’t deliver, either. I predict NY slices and garlic knots in your future – see you at Badamo’s soon.

My knowledge of craft beer? Minimal!

Lots of my beer nerd friends have vouched for the actual technical artisanal quality of their beer, which I do love, but I’m there primarily for the atmosphere and food trucks. They’re in a tiny space in the building with the Deutschtown mural on it, and there’s truly always something fun going on.

Again, not going to dip my toe too much into the realm of craft brews, but I will say that their Nancy B’s collab shook me to my core in the best way possible. Additionally, they’re dog friendly! They even have a dog wall where you can put a picture of your furry fren for all to admire. If you see a particularly cute scruffy, gray one – that’s my dogter.

Speaking of fur babies, Wagsburgh is North Side residents’ go-to for all pet needs. Tucked on the corner of E Ohio and East, this shop has been open since 2017. It has a super sweet origin story, with the owner, Joe, and his pastry-chef-turned-pet-store-entrepeneur career path. He’s an advocate for adoption and giving back to local shelters, as well as healthy, natural pet food and products.

While you’re on Western, be sure to pop in to Park House. I love them for their quirky events and bottomless popcorn. Admittedly, I’ve never had their Mediterranean-inspired bar food, but I’ve heard wonderful things.

My favorite time to visit is Wednesday nights for their bluegrass night featuring the Shelf Life String Band. Music starts at 9, but places to sit in this long and narrow bar go fast, so go early! Catching them play is a fun and unique experience, and feels like stepping into a charming small town bar for a one-time show with a band who’s having just as much fun as the audience – except it’s here in Pittsburgh, and it happens every week.

Let’s hypothetically say that you went to Park House, had a great time, and now just want to throw back a few affordable drinks in a clean, relaxed place that feels like your cool uncle’s basement. Meet Rigg’s. Caddy cornered around Allegheny Commons on Brighton, Riggs has been open since the 1940s. There’s an automatic bowling machine for 50 cents a game, a functioning jukebox with an extensive selection (it’s not there just for novelty’s sake!), a cigarette machine, and lots of neon lights.

The best part? The people. You’ll run into just about every demographic, and you’ll always be welcomed by the staff. Riggs is a bar in need of zero gimmicks – walking through the doors evokes a sense of nostalgic Pittsburgh sturdiness that can only be found any more on the North Side, and I expect Riggs will be around forever.

Gus & YiaYia’s is a straight up time machine into Pittsburgh history. Gus’ father bought the cart in 1934 for $175, and the family has been selling popcorn, peanuts, and ice balls ever since. The prices have likely been adjusted for inflation at some point, but you wouldn’t know it – Peanuts are $1.25, popcorn is $1.75, and ice balls are $1-$2.25 depending on the size.

You’ll find this cart almost everyday in the summer in Allegheny Commons Park. There’s almost always a bit of a line, especially on Pirates game days.

If you’re looking for an easily accessible view just as good as the one from Mt. Washington, look no further. The Fineview overlook is frequently overlooked ;), making it a true hidden gem – I almost chose not to share it here in order to keep it that way!

This (fine)view of the city has two things that make it unique:

1) Its total lack of bustling crowds and spectators. Nestled in a quiet, cozy neighborhood, you’ll just find dog walkers, passersby, and the occasional photographer taking advantage of the skyline alongside you.

2) Just below the overlook is a baseball field which plays host to many different leagues on any given night of the summer. The giant ball field lights in front of the cityscape add a dreamy feel to this unique perspective of Pittsburgh, as do the sights and sounds of the game going on below.

While we’re on the topic of understated magnificence, let’s not forget Allegheny Sandwich Shoppe. In business since 1981, this spot is known just as well for its breakfast lineup as it is for its sandwich variety. When I recently stopped in for lunch, it was one of the server’s birthdays, and the owner was passing out pieces of sheet cakes to everyone in the restaurant.

Big portions, affordable prices, and an incredibly friendly staff make this worth the stop.

Bear Dog Bikes gets its name from the shop dog, Marley. He’s also featured prominently on their website, including the Meet the Team page.

I don’t consider myself a bicycle aficionado by any means, but I do know that this little shop, open since 2017, takes great care of its customers, from beginners to pros. There are also options for any budget as well.

Plus, they carry Aero Tech Designs cycling gear, another PGH-based company based in the North Side.

My wish for 2020 is to take over the internet with this mysterious cat. She comes and goes from her little window post as she pleases, and what a pleasure it is when you catch a glimpse of her chillin’. You’ll find her just a few steps away from Allegheny Sandwich Shoppe.

Whose cat is this? Why was this window put here?

Is this little bby aware that she is a North Side legend?

We may never know. 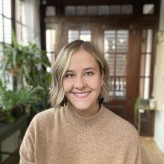 Laine is a pizza aficionado, a dog mom, a North Sider, and a writer. She's always down for a spontaneous road trip, a good book, or a nap. Born and raised in PGH, she's an Ohio University alum + recently completed her Master's in Professional Writing from Chatham. From food to events to obscure Pittsburgh history, she's got it covered.

Non-Traditional Ways to Get in the Holiday Spirit

Stroll With Us Through The Strip