Squirrel Hill, one of Pittsburgh’s most affluent neighborhoods, is surrounded by a bustling business district that has a lot to offer. While it is known for having a large Jewish population, Squirrel Hill is also home to one of the most diverse communities in Pittsburgh. This makes it a  cultural hotspot filled with countless unique spots to eat and explore.

With the huge variety of ethnicities present in Squirrel Hill, it’s no surprise that their restaurants reflect this. Craving Chinese? Everyday Noodles has a wide array of dim sum and noodle options. You can even watch the chefs make the noodles. Hungry for Middle Eastern? Local Pittsburgh chain, Aladdin’s, serves up delicious dishes like falafel, hummus, and rolled pitas. Have a hankering for Jewish cuisine? Check out NU Modern Jewish Bistro, owned by the same folks who run Pamela’s next door. They offer twists on tasty classics like lox and brisket for weekend brunch.

Need a drink? Squirrel Hill also has a few places to grab one with a friend. Independent Brewing offers an extensive beer menu with over 15 beers on tap and over 10 different bottles. Most of these beers are local to Western Pennsylvania with a few exotic favorites thrown in. They also have a carefully curated cocktail list for those who don’t like beer. Looking to enjoy some tiki vibes? Hidden Harbor is another hotspot with Polynesian-inspired cocktails. It’ll make you feel like you’re in the tropics. Looking for something non-alcoholic? Dobra Tea is the perfect place to sit back and relax with one of their exotic teas. From herbal to oolong, their selection is endless. The space will make you feel at home with its peaceful atmosphere and cozy cushions.

Squirrel Hill has so much to do in just a few blocks that you don’t ever need to leave. There’s not one, but two bookstores: Amazing Books & Records and Classic Lines. Not to mention, the neighborhood’s library is one of the nicest in the city. If music is more your thing, then check out Jerry’s Records. The 37 year-old store has a comprehensive collection of records with everything from metal to disco. They were named one of Rolling Stone’s best record stores in the U.S. for a reason. There’s also an outpost of the popular vintage store, Avalon Exchange, which offers a huge selection of unique clothing. If you want to take in a movie, The Manor Theatre, is an institution in Squirrel Hill. The small four screen theater shows new movies as well as independent films.

Plenty of Places to Play

Squirrel Hill has the perfect location as it’s surrounded by two different green spaces, Schenley Park and Frick Park. Both offer endless options to get outside and enjoy the sunshine. Both parks have a variety of trails to walk and run throughout the year. If trails aren’t your thing, then Schenley also has a rubberized track. Frick and Schenley both have tennis courts, but Frick’s are clay and Schenley’s are hard. Between the two parks there are pickleball courts, baseball and soccer fields, and a disc golf course. Whatever your sport, you’ll find it at either of these luscious parks. 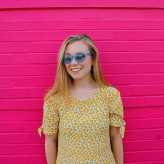 Max McCrory is a born and raised Pittsburgher who has a love for all things food. She is the creator of Nourish PGH, a blog dedicated to exploring the food scene in Pittsburgh. When she’s not eating or writing, you can find her at spin class, working on her photography skills, or listening to Harry Styles.