It’s been said that in Pittsburgh, ‘all is curious and wonderful.’

Believe it or not, those words were uttered way back in 1866. While a lot has changed since then, there’s no denying that Pittsburgh’s location at the forks of the three rivers, in a valley, among rolling hills still makes for breathtaking views.

Although the scenery has changed, from that of steel mills and smog into one of the most stunning skylines in the world, there’s no shortage of must-see sites around town. So whether you’re a local — or just visiting — scoping out the city from these 9 spots should be mandatory. Whatever you do, don’t forget to bring your camera. 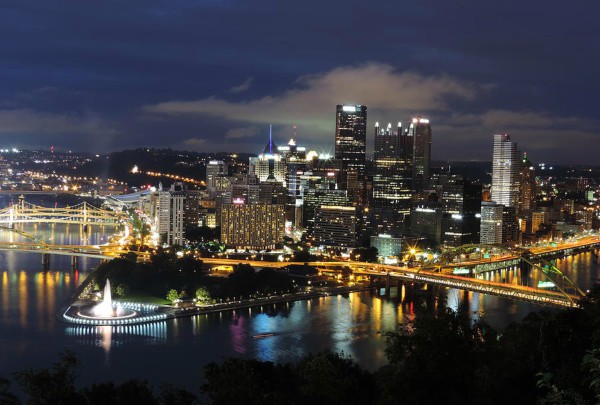 Make your way to Mt. Washington for the quintessential, “this is Pittsburgh” photo. If you’re driving up the mountain, do it right. Cross the Liberty Bridge going outbound and turn right on PJ McArdle Roadway. Excitement builds as you wind up the mountain, stealing glances at the growing view below. At the top of the hill you’ll hit Grandview Avenue. From there, you really can’t go wrong. Ride the Duquesne or Monongahela Inclines. Create your own “Greetings from Pittsburgh” postcard by snapping a photo on an observation deck. This panoramic view peers out onto the buildings, bridges, streets, and stadiums in downtown Pittsburgh and beyond. Situated within an urban environment, between two top universities, is one of Pittsburgh’s largest and most action-packed outdoor playgrounds. Schenley Park has a lot to offer folks looking to escape the city without wanting to drive far. Here you’ll find a little bit of everything, including wooded trails, tennis courts, a public swimming pool, running track, soccer field, and ice rink during the winter, as well as a golf and disc golf course nearby. If you’re looking for a picnic spot with a view, head to the Schenley Overlook at the top of the hill by the track and tennis courts. Park on Overlook Drive, then unfold your blanket in the grass while enjoying stellar views of the Pittsburgh skyline.

If you heeded our earlier advice and looked out onto the city from Mt. Washington, you’ve already seen two rivers become one from above. Now, it’s time for a close up. Point State Park is the perfect place to scope out all three rivers, the North Shore, and downtown. Of course no trip to “the Point” is complete without a stop (and obligatory photo) at the fountain. As a hub for outdoor activity, you can walk, bike, run, and even kayak to or around this spot. Set aside an afternoon to soak up the sun and sights of the city before taking the short walk to Market Square for a drink or bite to eat.

Looking for the best ballpark in America? Welcome to PNC Park, home of our beloved Pittsburgh Pirates and a epic views of the entire city. The coolest part of all just might be that the view from and of the stadium is equally as impressive. Perfectly situated next to the Allegheny River on Pittsburgh’s North Shore, PNC Park is in the heart of the action. If you’re attending a game, cheap tickets in the nosebleed section aren’t necessarily a bad thing. Trust us when we say there’s not a bad seat in the house! But if you want to be strategic about your seating and sightseeing situation, snag tickets that face the river, looking out onto downtown, the bridges, and Point State Park. You’ll be glad you did. Even if you don’t have tickets, the sights and sounds can still be yours simply taking a walk along the riverfront trail near the stadium, rooting on the Buccos with the boaters and tailgaters assembled along the way.

In the City of Bridges, it’s almost impossible to choose one as a top spot for taking in the Steel City. So we won’t. Instead, we pick all 446 of them. Okay, that might be a bit much. But you have to start somewhere, right? So put the Hot Metal Bridge (via bike), the Three Sisters (when the Steelers or Pirates have a home game), or the 31st Bridge (overlooking Washington’s Landing) whose blue hue sets it apart of others around the city.

Harry Potter fans, rejoice! Hogwarts has a satellite campus in Pittsburgh and it’s inside the Cathedral of Learning. The University of Pittsburgh’s iconic tower was the world’s tallest educational building when it was built in the 1930s. (Today, it’s only surpassed by Russia’s Moscow State University.) Enter the building on the first floor and you’ll encounter a massive study hall complete with arching ceilings, hanging lamps, and students hard at work. The must-see view that puts this spot on our list is going to take a little more work because it’s 42 floors up. You could take the easy way up by hopping on one of the newly renovated elevators. Or you could earn your view from the top by taking the stairs. From time to time, you’ll find people in fitness gear taking their workouts to new heights — or hikers prepping for a mountain climb! But there’s nothing wrong with a more casual stroll to a windowsill seat so you can relax and take in the view of Oakland and beyond.

Despite the fact that this small park in Pittsburgh’s Elliott neighborhood is at the same elevation as Mt. Washington, it’s often overlooked. Well, that’s a shame if you ask us because it’s easy to access, with plenty of parking that is a bit more scenic than Grandview Avenue. The Overlook is slightly upriver, so you can count on an expansive view of the city. You’ll be staring squarely at the spot where the rivers meet, creating a dazzling view both day and night. If you want to make a day of it, Station Square is a 10-minute drive down the mountain. Start at the Square and work your way up the mountain, or vise versa. What’s the point of having three rivers if you don’t take advantage of them? Well, what are you waiting for? Hit the water already! You can kayak, take a Ducky tour, learn to row, hop on the Gateway Clipper, and even paddleboard. There’s no shortage of ways to enjoy the rivers and waterfront in Pittsburgh. Plus, it’s sure to offer an entirely new view of the city you know and love.

Pittsburgh – the only city in America with an entrance. The New York Times said it best when they wrote, “You slide and slither into most downtowns…you do not so much enter the center as realize after you are there that it is all around you. Not Pittsburgh. Pittsburgh is entered with glory and drama. If you come to Pittsburgh from the airport, you do not see the city as you approach it. You see hills and valleys and the minutiae of suburbia, but no city. Suddenly the expressway dives into a tunnel through Mount Washington – and on the other side, revealed all at once, is a skyline of striking power.” It doesn’t get much better than that!